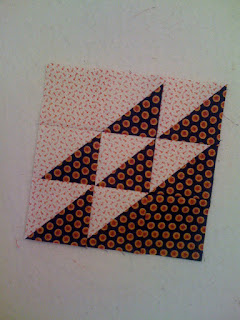 I think this is Corn and Beans.  It's a Sow-A-Long I joined midstream over at Randy's Blog.  I believe it was started based on the Farmer's Wife Sampler Quilt book but the author took offense!  Not really clear what the offense was but, a change in strategy was called for.  So the blocks are not from the book but are commonly acknowledged blocks in the public domain.  Postings of new blocks occur on the first and third Wednesdays of the month with  random Bonus blocks thrown in every so often.  Here's the blurb about the book  from Amazon,

" Be Inspired by the Stories The 1922, The Farmer's Wife magazine posed this question to their readers: "If you had a daughter of marriageable age, would you, in light of your own experience, have her marry a farmer?" The magazine at the time had 750,000 subscribers, and received over 7,000 letters. The best answers to this question are included in this book, along with the traditional quilt blocks they inspired."


Following the book yields 111  6-inch blocks set on point and sashed.  Since I started a few weeks ago I've made close to 40 of the blocks.  They are addicting!  I have been adding different blocks along the way in addition to Randy's. 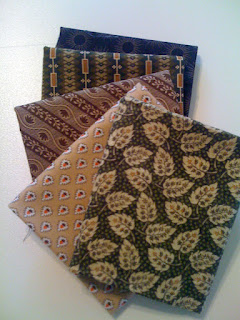 I have resorted to going through my stash to locate wayward Civil War reproduction fabric and picked up a few fat quarters locally.  I never considered doing anything but repro fabric for mine but perusing the internet there are some wonderful blocks and quilts using modern fabrics. 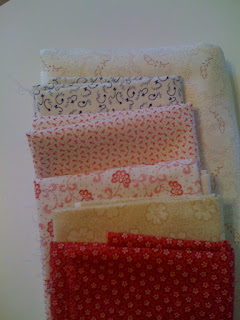 That bottom pink fabric  has the date on the selvedge:  1993.  I also got rid of a fair amount of fabric from the early to mid 90s that was just not quilt shop quality and I knew I'd never use.
I'll have pictures of the other blocks later~  Thanks for stopping by.
Posted by Marianne at 6:00 AM