On The Design Wall

A little behind here!  I have been keeping up with the Block-A-Palooza Quilt Along just been too preoccupied with another project, more about that later, but first, Block 5 designed by Miss Print.  I love the block and the way it turned out! 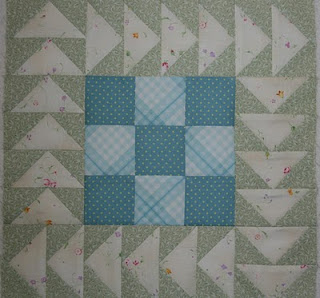 The green is from my stash, the others from the Romanza line. 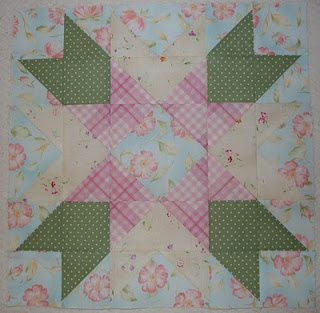 And this is Block 6 from Happy Zombie, love this design too!  Used all Romanza fabric, which I am getting worried about running out before the end.  I have the most of the pale yellow background so I am doing my best to use that wherever possible.  I will not be playing along tomorrow with Block 7 as I was summoned for the dreaded jury duty!  I shouldn't complain:  this is the very first time I have been called and no matter where I have lived I have always registered to vote.  If you can believe this, my daughter was called about one week before she left for college her freshman year!  The judge very kindly excused her, but what a start.
One of my quilting New Year's resolutions besides making a dent in getting my growing pile of quilt tops quilted (resolution #1) was to start making some of the quilt kits (resolution #2) I have collected over the years.  And I have a lot.  I have a history of being a real sucker for those Objects of Desire!   ~ I've started with a kit that somehow became separated from its instructions, here's the fabric along with some from my stash (resolution No. 3:  use stash rather than buy). 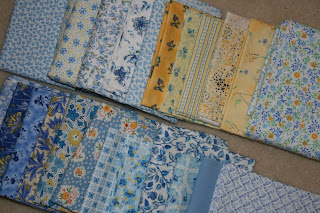 So sans any guidance, I started on a Bento Box design, the pictures really don't do it justice, 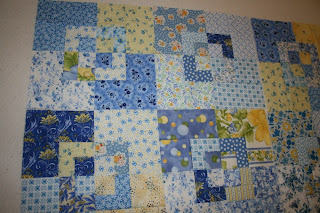 When I did a doll quilt swap a few years ago, my partner sent several blue/yellow charm squares that I've been able to put in the quilt.  Each Bento Box block (try saying that three times fast!) measures 8 inches finished.  I've been somewhat obsessed with working on it for the past few days, here's my progress so far, 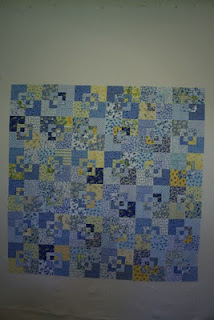 It really reads more blendy in person, exactly what I was trying to achieve.  I hope to get another couple rows done before running out of fabric.
Talk to you later ~
Posted by Marianne at 2:30 PM

I absolutely love it!! I did a yellow and blue quilt top last year and really loved working on it. I eagerly await your finished product!!! Excellent job!
Jayne

I love your block! That blockapaloosa is going to be a great quilt! Your blue and yellow quilt is beautiful too!