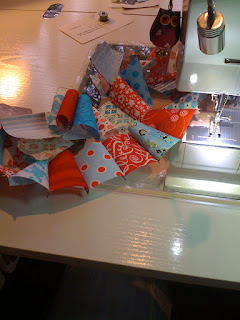 I did a disappearing 9-patch swap a while back using red and aqua fabrics.  The participants made 100 blocks, sent them in to the organizer, and received 99 (plus one of your own) back.  I was clueless what to do with the blocks, I just knew I did not want to put them all together as a D9P quilt.  And the cutting and sewing of the blocks, well, let's just say they were a bit wonky!  Yikes!  They languished on a shelf for months until an idea was formed, I'm working on the border now and hope to show the finished top this afternoon.  here's a sneak peak. 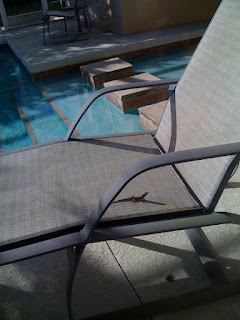 And look at this guy, lounging in the sun poolside!
Posted by Marianne at 9:31 AM