As in dunce, dimwit, or dunce, all names I was calling myself after cutting out the Plan C Schnibbles and sewing the border strips into four patches.  Talk about being on auto-pilot!  Gee whiz.  {Our assignment was to make either Short Story, Schnibbles or full size using Carrie Nelson's new book Schnibbles Times Two.} 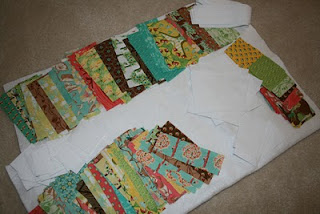 I used two charm packs of Botany.  Due to my snafu with the four patches, I had to change the border design.  I think it still works okay. 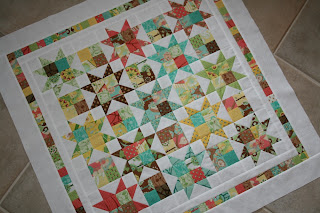 I loved all the birds, and spider webs in the fabric.  It's a really cute, bright line.  I'm going to bind it in the tone-on-tone coral.  Here's a close-up, 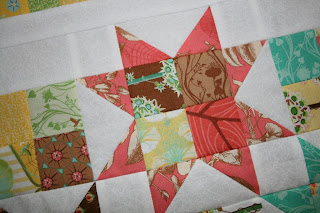 I can't believe we've come full-circle.  A big thanks to Sherri and Sinta for the idea and coordination.  I've had a lot of fun sewing and admiring everyone's work each month.   I wonder what they have planned next?  And just because it's cute, a little red Dutch car we saw on the streets of Amsterdam, 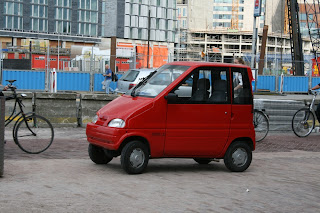 Until next time~
Posted by Marianne at 6:00 AM

Love the Botany in that Schnibbles. It is a great looking quilt.

I haven't made anything with Botany but I have admired it from afar. I LOVE your quilt. I love the clean crisp look of the white.

Very beautiful choice of fabrics and border. I love .

Your Schnibbles looks wonderful! Funny how many people changed the border this time. I do think it looks prettier.
Have a lovely day!

PS: How did you like Amsterdam? I was born there and my daughter studies there now. I love the city! So dynamic.

Your Plan C turned out so beautiful! I like the pattern you made, I think that would also be nice with Christmas fabrics - the last Xmas wall hanging I made was long ago!...
Thanks for your visit and comment!

I think it is just adorable and I like your twist on the border a lot! And Botany is really neat! :-)