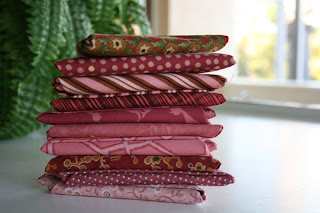 After my dissatisfaction with my last project I stopped in at my LQS just to look and to admire. I ended up doing more than looking. Yikes! 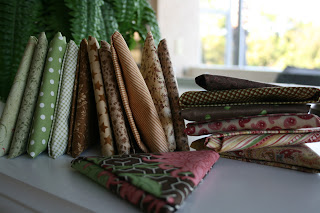 There are so many new lines out and they all are sooo nice! I figured I'd limit myself to the fat quarters though so as to minimize the damage. 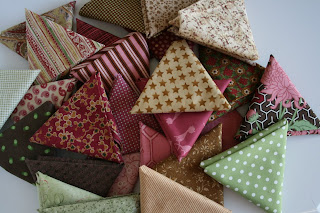 I just found I could not resist these. I love pinks, greens, browns together. Aren't they pretty? 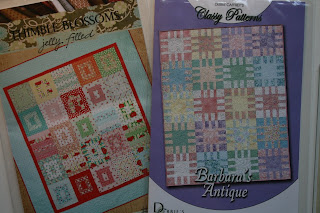 I picked up two patterns also and thought I'd use the one on the right for these fat quarters. I like the idea of doing a positive/negative effect. I ran into one of the store's "odd" clerks. She seems to do everything in her power to discourage you from buying anything. Case in point, while checking out, she asks do I know that fat quarters are more expensive than long quarter yard cuts? Talk about dampening my fun! 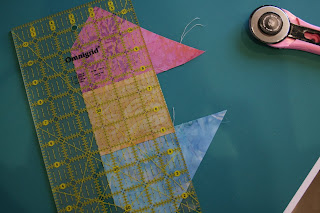 I've also been working with the leftovers of my Batik Challenge. Making the blocks yielded some half square triangles. More about this project next time. 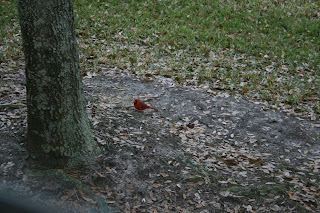 This little guy is a pest! We live on a corner lot but have a small swale on the street side of the house. It's filled with trees and vegetation and that's the side my sewing room is on. This bird has spent the last 7 years pecking at our laundry room window mainly during breeding season! When things get really noisy I resort to taping a picture of a advertisement from a magazine showing a closeup of a woman. There's one from Secret Deodorant that works well! 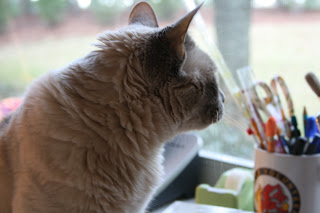 Looks like he's attracted some attention.
Posted by Marianne at 11:15 AM

Now those are PRETTY fabrics...I understand that you needed to take them along home! What is important in *our* minds, the FQs are fun and we can get many of them, seeing fabric rolled out on the table for 1/4 yd. just tells me I need more ;>)!

The fabric is beautiful, but I just can't believe that the sales person was actually discouraging you. Not too much fun! I love the picture of your cat staring down the bird, classic.