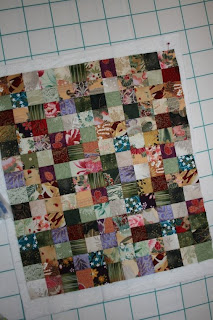 Not much sewing going on here as I've been feeling out of sorts with a cold, an unusual one at that. Mainly with a sore throat, rather than the more typical symptoms. This is all I have accomplished in the last few days. I decided to simply sew all the 1.75 inch squares together rather than make four-patches and now my cutting table is empty. I am none too happy with the results but they match the effort exerted. 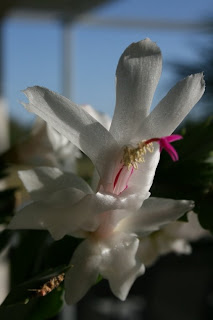 My two Christmas cacti have begun to bloom. I realize these plants thrive on neglect but really, now! Sometimes I think I should be arrested for what crimes I commit against these two! I have been known to go weeks without watering. They must be in the perfect light, east window, or maybe they like the view of our lake. I have had them for several years and they never fail to bloom, usually twice a year. 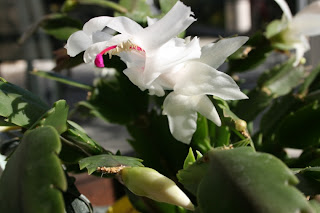 This poem comes to mind,
Forgiveness

Forgiveness is the wind-blown bud
which blooms in placid beauty at Verdun.

Forgiveness is the tiny slate-gray sparrow
which has built its nest of twigs and string
among the shards of glass upon
the wall of shame.

Forgiveness is the child who
laughs in merry ecstasy
beneath the toothed fence that
closes in Da Nang.

Forgiveness is the fragrance of the violet
which still clings fast to the
heel that crushed it.

Forgiveness is the broken dream
which hides itself within the corner of the mind
oft called forgetfulness so that
it will not bring pain to the dreamer.

Forgiveness is the reed
which stands up straight and green
when nature's mighty rampage halts, full spent.

Forgiveness is a God who will not leave us
after all we've done.