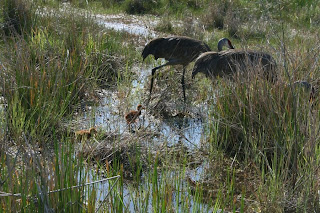 There's a littoral area right behind our house that attracts all sorts of wildlife, mainly birds and a few river otters. A few weeks ago I spotted a Sandhill Crane nest right in the middle of the reeds! A neighbor had been watching prior to me and apparently it took three attempts at nest-building before the Mrs. was satisfied! She laid her two eggs and a few weeks later, today, they hatched. 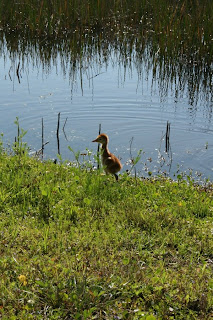 Returning from my walk there were cars and bicycles parked on the side of the road, some people with those huge lenses on their cameras. 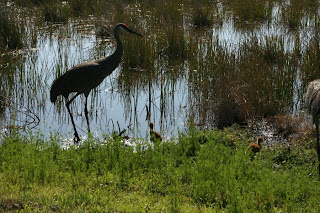 By the time I got my camera and returned everyone was gone. I waited a while and the parents took the babies onto the grassy area adjoining the water. I was amazed how close they allowed me to get. Both parents make a purring sound to keep the chicks near, I am guessing. 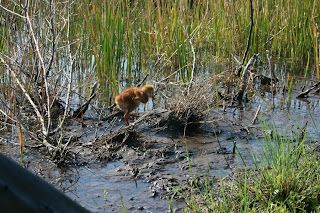 The chicks were really struggling to get through the grass and reeds and to keep up with the parents. The adults are about three to four feet tall. 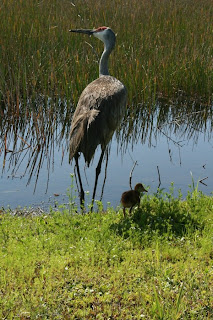 The next several weeks will be a real challenge. In addition to avoiding alligators, raptors, and other predators, vehicles pose a real threat. 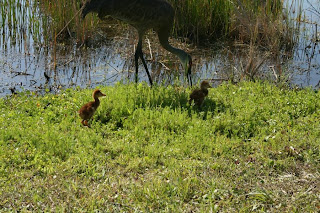 It is unusual for both chicks to survive. These two seem to be in great shape so I've got my fingers crossed. 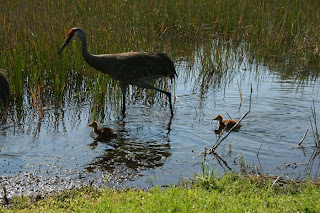 Thanks for stopping by.
Posted by Marianne at 3:40 PM

Those are some great pics... what kind of camera do you use? Those chicks are adorable, by the way.

Thanks for sharing! I just love to see wildlife, especially newborns. I have my fingers crossed too!

Your pictures are beautiful. I was taken back for a minute when you said that they would have to survive alligators, among other things. I took another look at where you live and then wondered how often you run into them if they are that close. I will cross my fingers for the little guys.