It was bound to happen. We've created the perfect environment a snake could ask for on our lanai: plants, water (pool), and food (lizards) and no predators (birds). The last part being our lanai is fully screened. Now don't get me wrong, we've had snakes before but mostly of the non-venomous bent. So it was alarming to find a twelve-inch Pygmy Rattlesnake right there.  That's not my picture, we were too anxious to get it out of the lanai to think to take one!  What a feisty snake!  It shook its tail, and reared up striking out at anything.  It was no match for the broom, ten-foot pool skimmer, and generous glasses of pool water thrown on it.  Last we saw, it was slithering off towards the woods. 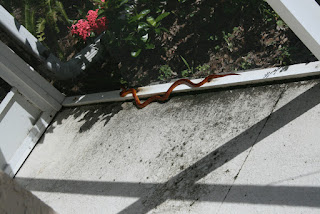 This is a Corn Snake I had to chase out last fall. 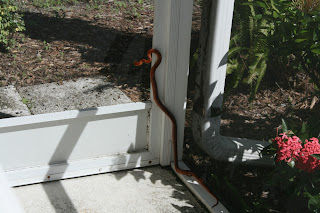 Much larger than the one that bit me a few years ago.  When my daughter was still in high school I volunteered at the school's library.  Talking with the librarian one day he told me of a Boy Scout camping trip he took with his son and all the snakes they encountered but which were harmless.  So a few days later when I found a Corn Snake I got the non-so-brilliant idea to capture it and show it to my daughter.  Oy! That little twelve-inch snake reared up and managed to strike my thumb twice right down to the bone.  That necessitated a week's course of antibiotics after catching the same snake and bringing it to the emergency room (not necessary, btw---treatment is based solely on symptoms).  It looks quite fearsome with it's vivid coloring but is non-venomous.
I've met the Eastern Mudsnake also, though usually when gardening.  We both run in opposite directions!
The Black Racer is another common snake here in Florida. I found this guy likes to hang out in our Sago palms hunting down the lizards.  They are also easy-going and usually take off rather quickly hence their name.
Back to quilty things next time, thanks for stopping by~